An elephant ride into a different world. 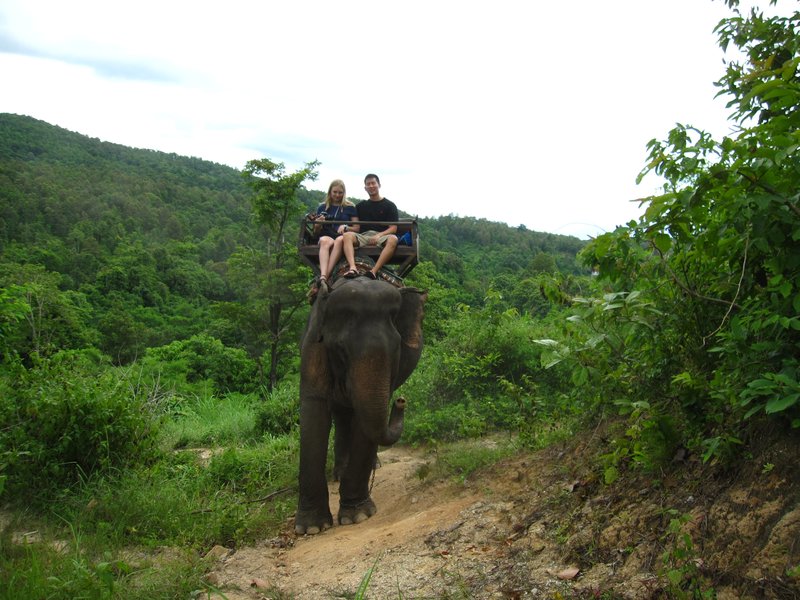 I look a little worried that the mahout left the elephant to take our picture. Didn't seem like such a great idea to me!

Thailand has several Royal Projects and one involves helping the people of the hill tribes to learn new agricultural methods and to receive occupational training in an effort to reduce poverty. We visited a village that has 7 different groups of hill tribe families that live in a collective community that farm together but makes handicrafts unique to their tribe. Our guide gave us some background on the different dress of the tribes. Here are my favorite 2 tribes and their stories: 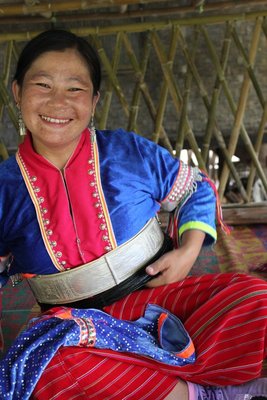 Palong: The Palong women wear beautiful silver belts around their waist. The belt is never taken off. They even sleep with it on. The only time it is removed is when the woman dies and then it is given to her daughter or daughter-in-law. Our guide told us the story of the belts: Long ago, the Palong women were from the heavens and had wings like a bird, including tail feathers. They would come to earth to fly and play. One day, a prince caught one of the Palong because he thought she was so beautiful. He tied a belt around her waist so she could not escape. The gods became angry with the Palong because she allowed herself to be caught. She lost her wings as punishment and had to wear the belt forever. The Palong women wear a silver belt to this day. 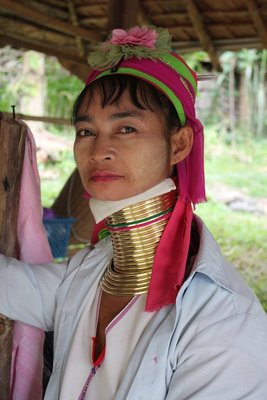 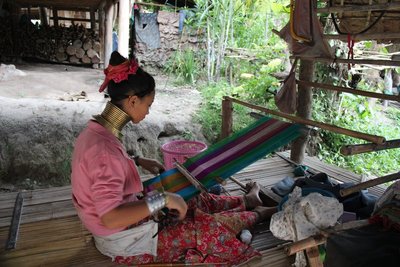 Karen-Padung: This tribe is also called the “Long Neck” tribe. They are actually from Burma/Myanmar and are political refugees. The Thai government is trying to help them by not allowing them into major tourist areas where they will be exploited. They make and sell handmade items in their villages and that is the only place you can buy the goods. Their movements and settlements are very closely monitored. In order to visit them, we had to travel into the mountains. (We took an elephant ride to their village). Our guide told us that there are a lot of misconceptions about the women and why they have the brass rings around their neck. It is not for beauty, although all of the women we met were very beautiful.
Long ago, a young Karen-Padung woman went into the jungle and did something very, very bad that insulted the gods. (We were never told exactly what she did). It made the gods so angry that they sent a tiger into the village to kill as many women as it could. The tiger would raid the village and gobble up young women. This went on for years before the elders decided to hold a ceremony to try to appease the gods. They held the ceremony and the gods told them what to do. They were to gather all of the young women born on a Wednesday under a full moon. Once they had all of those girls collected, they were to stand in a circle while chicken bones were thrown. The landing of the bones indicated the chosen female. The chosen girl had her neck wrapped in bronze and the area below her knees wrapped with bronze rings. That girl was housed in a hut at the front of the village. When the tiger came hunting for girls, he would see her first. She no longer looked like a regular woman and confused the tiger so he left the village alone. The rings are for the neck and legs because the tiger had killed the girls by biting them on the neck and then dragging them away by the leg. The brass rings covered the 2 vital areas for a tiger attack. Over time, more and more parents wanted their daughters protected in this manner until it became a part of the women’s dress for the tribe.
The village had a set of rings available for inspection. It was HEAVY. Many of the women also had handkerchiefs or pieces of cloth tucked under the rings for comfort. The girls get their first ring at 6 and add one ring a year until they are 12. At 12, they may stop or they may continue to add rings. It is kind of a point of no return if they continue past 12. It permanently changes their physical form if they continue on with the rings. Life without the rings around the neck is not possible for women that decide to continue adding the extra weight and height. It makes their neck too unstable. From what I saw, most of the women in the village decided to continue adding rings.

Ahka Tribe: The Ahka tribe is the most poverty stricken of the tribes in Thailand and the most numerous. We saw ladies selling goods all over the city every day. Their costumes are beautifully adorned with silver pieces. You could hear them as they walk around because they announce themselves with a little wooden frog that sounds like a frog chirping when you rub a stick over it. 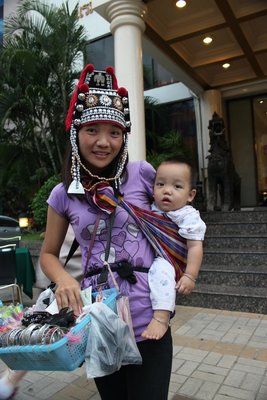 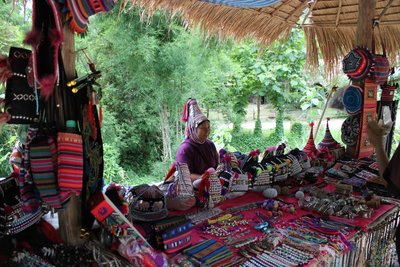