Elephant kisses are sticky. (In case you were wondering). 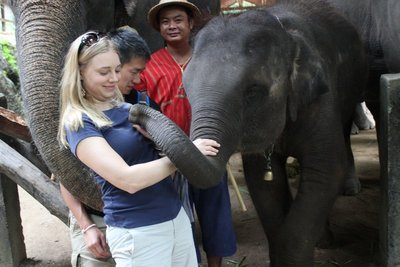 Thais love and revere elephants. There are many elephant camps all over Chiang Mai set up to take care of the many elephants in Thailand. Elephants are safer in camps because of poachers that want the elephant’s tusks. Elephants can also be a real nuisance to farmers because they can eat an entire crop of vegetables in one go. Seriously. They eat all day and a herd could wipe out a farmer’s entire crop. The elephants are not really safe in the wild anymore in Thailand.
We visited a camp that focuses on conserving elephants and also showcases their talents. I wasn’t sure if I wanted to go to a place where elephants perform. Our guide put it to me like this: Elephants used to have 2 jobs in Thailand. They were transport or they did heavy lifting in the logging and construction industries. With modern technology, they are no longer needed for these jobs. They can’t run wild because of poachers and the elephants are quite clever. It is very expensive to keep elephants because of the amount that they eat and the fact that each elephant requires a mahout (caretaker). The performances provide some mental stimulation for the elephants and help to pay for the care and feeding of the elephants. She assured us that we would see no cruelty, only smiles. I tried to keep an open mind. (The tour was part of a packaged day. If I hated it, I could go and wait in the lot until it was over. Truth is, whether I attended or not, it was still going to happen and will continue to happen for as long as the elephants needed caring for.) 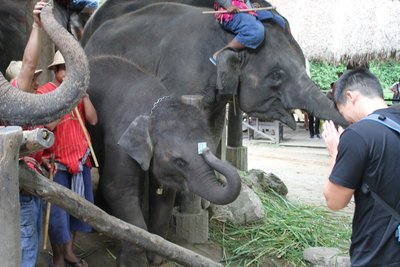 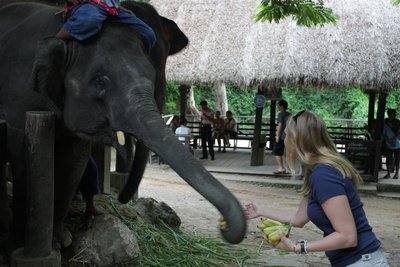 We met the elephants and gave them treats that we purchased. They love bananas and sugar cane. As soon as I walked over to them with the treats, 5 trunks snaked my way and they were blowing air at me and lightly stomping their legs in excitement. They wrapped their trunks around my hand and were pulling for the treats. I was surprised by how close we could get to the elephants. I was standing in between two and their trunks were wrapping around my waist and arms. They are pretty curious creatures. 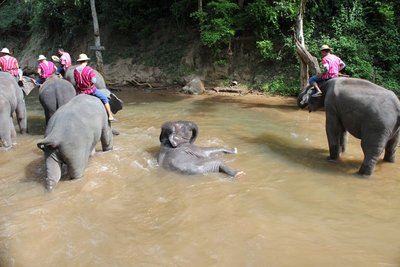 After the elephants interacted with the people at the camp, the mahouts led the elephants down to the river for a morning scrub. The baby elephants were hilarious. They rolled on to their sides and completely sunk into the water. All we could see of the one was his trunk…he was using it like a snorkel. The elephants seemed to enjoy being scrubbed with the bristly brushes. Toward the end of the bathing, the camp employees started indicating that we should go take a seat for the show. 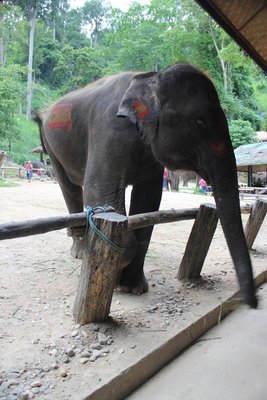 The elephant show was ok. The elephants were treated kindly and a few of them were real hams. They walked holding each other’s tails, raced one another in a dexterity course where they had to pick up items with their trunks, and some of the huge elephants demonstrated how they were utilized in the logging industry. The show was designed to show the power, dexterity, and cunning of the elephants. My favorite part was the elephants painting pictures. I would not believe that an elephant had painted it if I had not seen it. 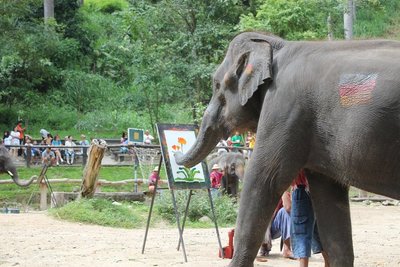 My feelings about the elephant camp were mixed. I think it is sad that elephants cannot be safe in the wild due to man’s encroaching on and taking their territory and the fact that there is a real demand for their tusks. They are very beautiful creatures and should be in the wild, but that is not possible. I did not see any cruelty so that made me feel a smidge better.
In case you were wondering what a mahout is, a mahout is the elephant’s caretaker. There is one mahout per elephant and it is a huge commitment. The elephants bond with their mahout and it is a long-term relationship. The mahout, bathes, feeds, trains, and spends time with his elephant. It can be very distressing to an elephant if his mahout decides to quit.