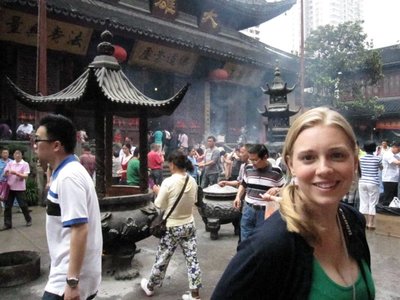 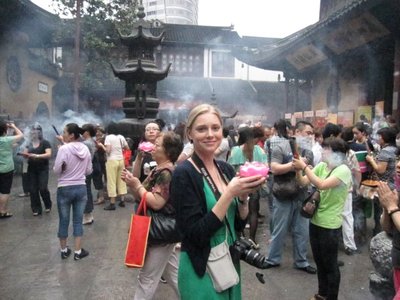 Off the beaten path and an overlooked treasure.

We made one last stop to a mausoleum of a Han dynasty emperor before we were dropped at the airport. The museum is unique due to the way you can view the pits and artifacts. The pits are topped with glass and we were able to walk over them and look down at the artifacts. The pits were discovered in 1997 and the museum has only been open to the public since 2007. Our guide wondered how we had even found out about the museum. She said that in the past 12 years she has toured the Terracotta Warriors Museum thousands of times, but has only toured this museum a handful of times. Thank you, Lonely Planet for the recommendation! It was one of the least crowded places we visited in all of China and the experience was very unique.
There are a total of 81 pits and inside of them are terracotta soldiers, terracotta animals, ceramic jars, chariots, and all of the goods that an emperor would need in the afterlife. All of the relics are on a small scale. The soldiers each have unique faces and include men, women, and eunuchs. The people are also of different regions of China and the archeologists could tell which were Mongolian, etc. because of different facial features unique to different regions of China. Each little terracotta person was dressed in a silk outfit and each figure is anatomically correct (which is how they could tell they were women, men and eunuchs). Only the pits around the emperor’s tomb were excavated. The mountains, actually man-made mounds, holding the emperor and the empress were left alone. Surrounding the mounds of the emperor and the empress are the mounds of other royal family members. The mausoleums of the emperors are very large and can cover many square miles. Xi’an has the mausoleums of 74 emperors surrounding the city. China had over 150 emperors and Xi’an was the capital city for over 70 of them.