Our final stop of the day was at a teahouse outside of the Temple of Heaven. The tea girl (my term) taught us how to properly serve 5 different types of tea and did a tea tasting with our group. We tried Jasmine tea, black tea with lychee, pure tea, fruit tea and a green tea. The majority of the group preferred the sweet fragrant jasmine tea. Our hostess had a good time teasing Dan for not knowing more about tea. I guess all Chinese are supposed to know this stuff? Who knew? Not Dan, that’s for sure! 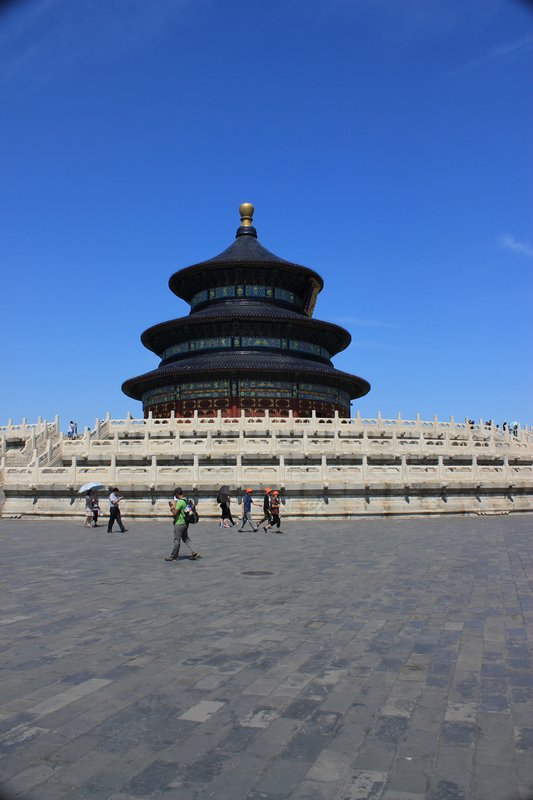 In the Ming Dynasty, the emperors spent three days every year fasting (no meat, no ladies) in the Palace of Abstinence and then prayed to the God of Heaven for a bountiful harvest.
This is another building restored in preparation for the tourists that accompany the Olympics. It is gorgeous with cobalt blue tiles on the roof and multicolored brilliant paint on the outside of the temple. A gigantic park where retired folks gather to enjoy dancing and playing games surrounds the temple. I asked our guide about the retirement age in China. She said that for ladies it is 55 and for men it is 60. The old folks looked like they were having a blast.

The house the Dragon Lady built. 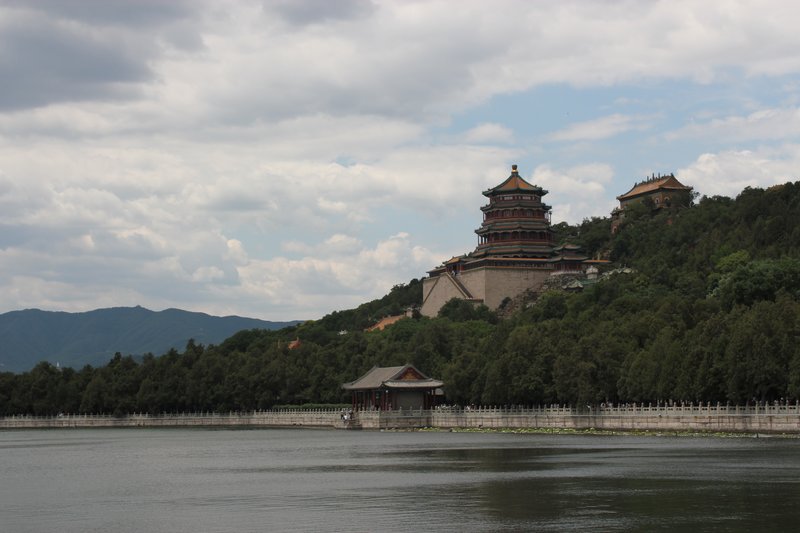 What is the best way to spend a sweltering afternoon? By a lake, of course! The Summer Palace is located north of the city and is largely dominated by a man-made lake. The lake was dug by over 100,000 workers under the command of China’s Dragon Lady, an empress dowager on a power trip. Her son, the emperor, was basically her puppet for 48 years. Her claim to fame amongst Chinese women is that while she lived to the age of 78, she only looked 40 because of her beauty regiment of pearl creams. The lady basically bankrupted the country to build herself palaces, temples, and to live the good life. When we walked through the gate and saw the palace for the first time, Dan said, “Ahhhh. So this is what bankrupted the country. Nice!” And it is. In fact, it is breathtaking. One of the emperors also built a corridor aong part of the lake in honor of his mother’s 60th birthday so she could walk by the lake in the intense heat and be more comfortable. The corridor is over 2,000 ft long. And has 8,000 unique paintings on the ceiling. He was the ultimate momma’s boy! 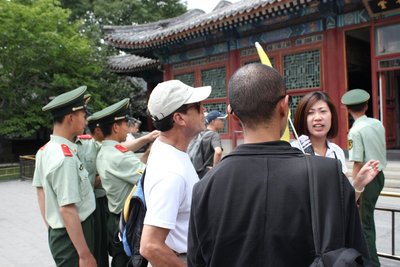 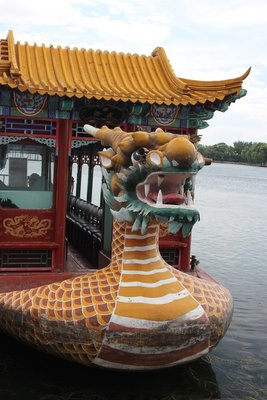 We definitely weren’t the only people enjoying the grounds that day. People were everywhere. The same sights we were visiting are major tourist attractions for people all over China. The training grounds for the military is close by, too, and huge crowds of young soldiers were walking around, smiling, and taking pictures.