Stalls as far as the eye can see. 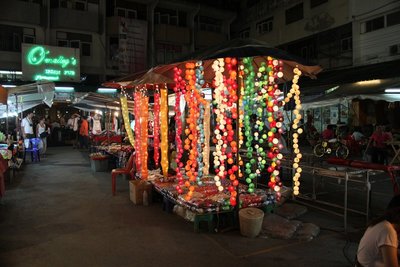 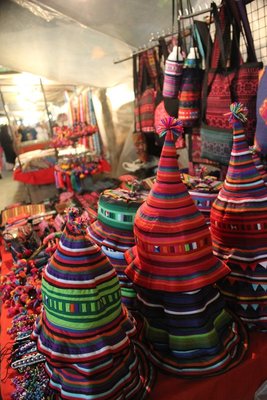 After seeing genuine Thai handicrafts made by local Thai workers, we hit up the night market as educated shoppers. We could spot fake silk from a mile away and knew how to negotiate prices accordingly. Julia and I scoured the market from one end to the other finding all kinds of treasures for us and for our friends/family back home. The stalls held clothing, purses, shoes, jewelry, fruit, fried foods, silk, and carved soap. There were also tons of massage places. A one-hour foot massage cost 200 baht which converts to about $7US. All of the massages were pretty cheap. The most expensive one-hour massage was an aromatherapy massage and it was $18 US for an hour. We didn’t take the time for a massage because we had too much shopping to do! It was a fun and tiring night of shopping with my sister-in-law. 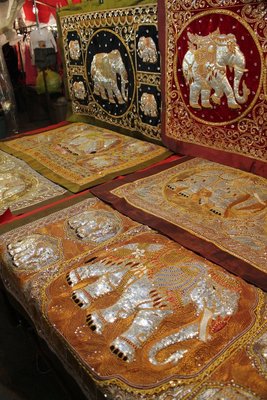 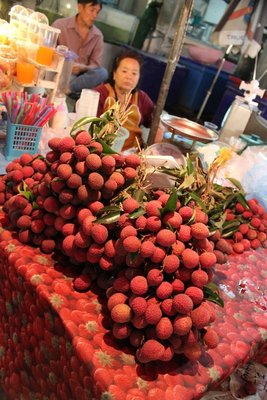 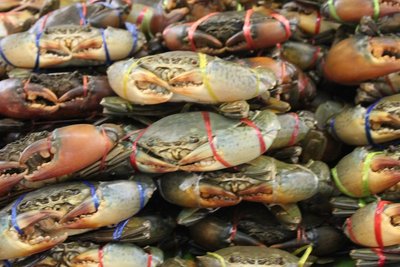 Thai goods made right in front of our eyes. 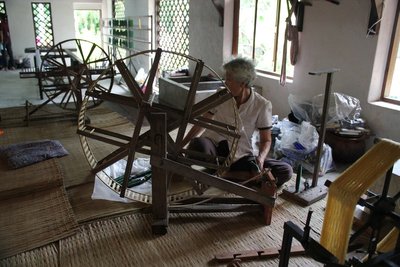 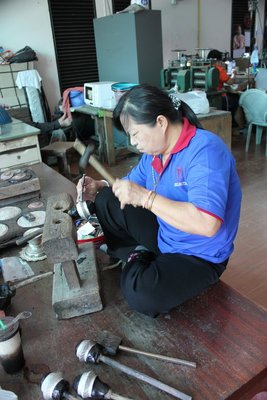 When our guide dropped us off at our hotel after picking us up at the airport she informed us that our hotel was in a very good location directly across from the night market. She advised us to take a look around the night market, find the types of things we would like to buy, and then wait. She was taking us to Handicraft factories to see how many of the Thai goods were made and she wanted us to wait to purchase items until we saw the quality items made by the Thai people as opposed to the cheap or faux items made by machine. We later found this to be superb advice and we had a great baseline from which to judge the goods at the Handicraft villages.
We visited Handicraft factories for silver items, silk, hand knotted rugs, and paper umbrellas. While we visited factories in China, they were nothing like the factories in Thailand. In China, we would see one person demonstrating how the items were made. In Thailand, we saw dozens of people completing each step in the process and you could see them stocking some of the finished items. It was definitely more authentic.
The silver factory makes items for a charm company similar to Pandora and we watched them making charms and pendants. At the silk factory, the ladies were weaving cloth on the looms. Cloth I later found in the store that was attached to the work area. The paper umbrella handicraft set-up was the most impressive. The ladies worked in stations all in a row and we could see the umbrellas taking form and watched the ladies painting the designs. 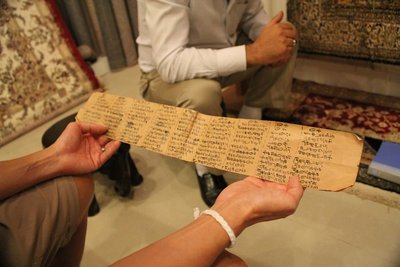 This key tells the person making the rug the order of the colors of the knots to make a pattern.

We also learned how hand knotted carpets are made. Each carpet takes months to make and can involve an entire family. The carpet place sells the carpets of 73 different families. Each family owns a specific pattern so the store sells 73 different patterns for carpets. The handiwork was absolutely beautiful. The owner showed us the difference between a $4500 carpet and a $10,000 carpet. The latter was so intricate and beautiful it looked like a person could not possibly make it!

Golden Beauty in the Mountains 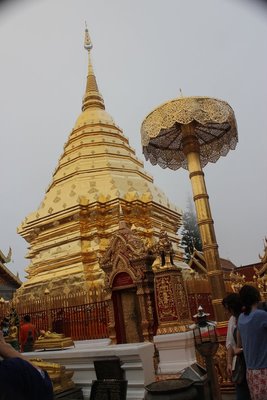 Our first day in Chiang Mai we had a tour of a mountain top temple about 45 minutes outside of the city. Chiang Mai itself is not a very large city, especially in comparison to the cities we saw in China. The population of the city is about 160,000 people. The population of the province stands at 1.5 million. Shanghai had 23 million people. Big difference and a very pleasant one! 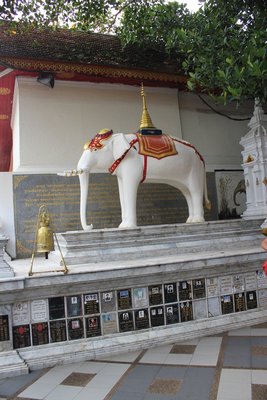 The temple was built in 1383. The king at the time chose a white elephant and decided that wherever the elephant stopped, he would build a temple to house the holy relic of Buddha that he had in his possession. At the time, Chiang Mai (city, not province) already had dozens of temples and so the king thought that maybe the elephant could choose the perfect location. The elephant walked 15 km up into the mountains before he turned around three times, trumpeted, and lay down. The temple was built on the spot and when the elephant died, its remains were buried at the temple. The wat is so shiny and golden that it hurts your eyes to look at it. We could see it from the city on a clear day as it shines in the sunlight. Our guide told us all about the rituals of the temple and of the monks. 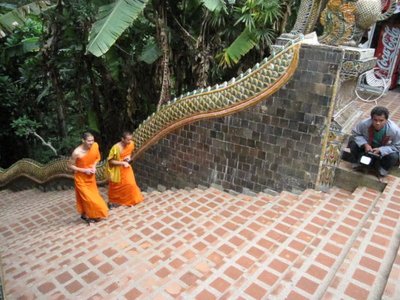 Dan and I were blessed with holy water by one of the monks and given a sacred cotton bracelet to wear. Monks cannot touch women so he flung the bracelet at me and had Dan tie it. When it was Dan’s turn to receive the bracelet, the monk smiled and said, “Come closer…closer!” The prayer of the monk was said in Thai and then he rambled off some phrases in English. It sounded like “Good luck, good morning, good health, good success, happy and healthy, good afternoon, lucky…lucky…good bye”. (No, mom, I did not convert. My faith is intact. Blessings and prayers from a monk seemed harmless. Breathe.) 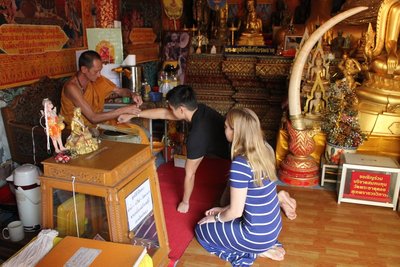 Dan and I noticed that the temples and Chiang Mai in general were overrun with dogs. They were running up the 309 steps to the temple at feeding time, walking around the wat, sleeping in the sun and on the mountain road to the temple. They were everywhere. When a dog is “in the way”, people simply go around the dog. And by go around, I mean on the roads, too. Cars and trucks either go around or stop and wait until it is safe to go around the dogs. Thais are very kind to the dogs and from what we could see, to all animals.