Ming Tombs: The Final Resting Place of the Emperors of the Ming Dynasty 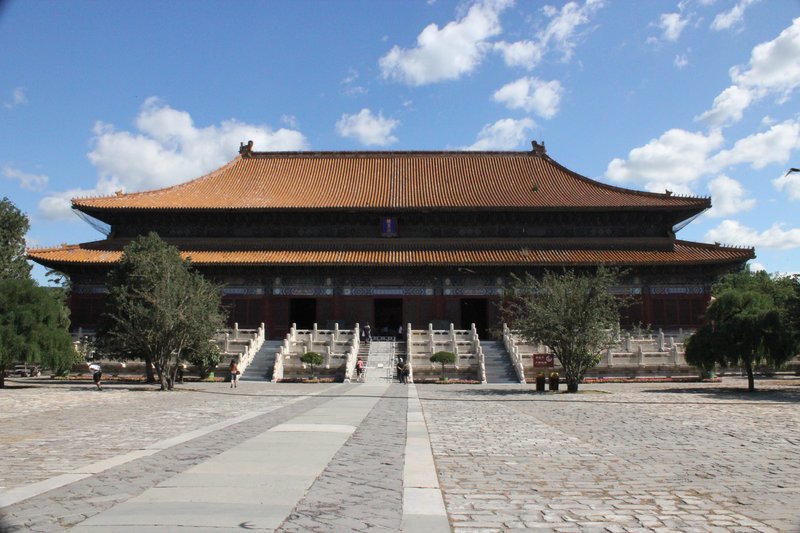 We woke up around 5:00 am and started our day. We never wake this early, but at this point, our bodies have no idea what time or what day it is. The hotel has a full breakfast buffet with a lot of interesting choices. Breakfast foods here consist of fruits, cereals, pastries, cooked vegetables, congee (I have no ideas what it is but it looks like a pasty soup), fried noodles, fried rice, boiled eggs, steamed buns, and corn on the cob. I felt like I was having lunch for breakfast. We loaded up on fruit and proteins so that we wouldn’t get too hungry before we stopped for lunch.
Our tour guide, Sally (Pan Jioa was her true name), met us in the lobby and we started our day. On our itinerary for the day: Ming Tombs, a jade factory, lunch, The Great Wall at Badaling, and a silk factory. Sally’s English was fantastic and our group was comprised of English savvy travellers. There were three girls from the Bay area that extended a trip from a wedding they attended elsewhere in China, an Australian flight attendant that worked for Emirates airlines and lived in Dubai, and a couple from Poland that decided to visit Beijing for just two nights.

Ming Tombs:
The Ming Tombs are the final resting place of 13 emperors of China. Only two tombs are open to the public and we visited just one, the tomb of the third emperor of the Ming Dynasty. The 3rd emperor was responsible for the construction of the Forbidden City. The actual tomb is a mountain behind a temple that’s purpose was for the prayers of the emperor’s children. When an emperor died, he was buried with all of his concubines, which would answer why the emperor needed a mountain. Apparently, the emperor would have thousands of concubines.
The tombs are in a beautiful location surrounded by orchards and mountains. The location was selected based upon the principle of Feng Shui. The mountain on one side is a dragon mountain while the mountain on the other side is a Tiger mountain. They provide protection from bad spirits. The tombs are also directly lined up with the Forbidden City. They were built on the same meridian.
In front of the tomb we visited is a large Wudan building that hosts a museum full of artifacts from the 13th Ming emperor. According to our guide, he was a bad emperor. I asked her what made him bad and she said that he was not in touch with the needs of the people and so he was the last of the Ming emperors, a new dynasty took over and began the Ching dynasty. If he were a good emperor, the Ching Dynasty would not have begun. The artifacts were oxidized and dingy due to the pollution and perhaps the environment in which they are being displayed. The Wudan is not temperature controlled. It is a very interesting building, though. The architects used 16 huge tree trunks as supports and there weren’t any nails used. The used a form of tongue and groove construction. The building is 600 years old and is still in use. Pretty impressive. 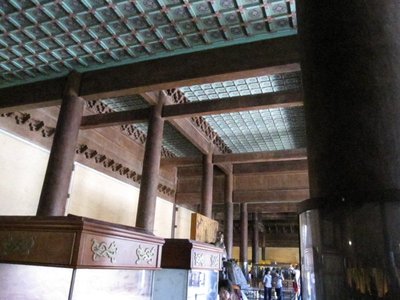 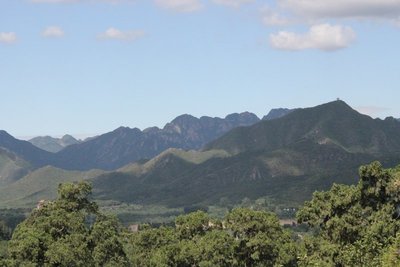 As we exited the area, we had to go through a spirit gate and say a phrase in Mandarin that translates as “We’ll come back”. It was to keep the ghosts from following us. The women had to step out using their right foot and the men stepped out using their left foot. 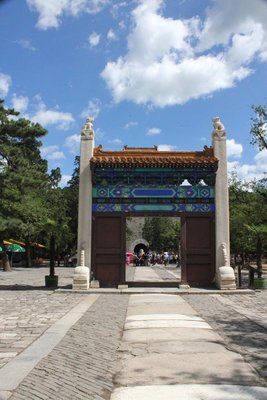