A pleasant walked followed by a death defying ride.

On our final night in Xi’an we decided to walk the ancient city walls. The walls form a square around the old part of the city. Within the walls there is a bell tower and a drum tower. The bell would ring in the morning to let the people know that the gates were open and the drum would sound at night to let the people know that the gates were closed. While we were close to the North Gate, the South Gate was the only entry point open after 7 PM so we hailed a taxi to the South Gate. The walls are absolutely beautiful at night. Red lanterns hang and give off soft light while the gatehouses are covered with lights and stand out so brightly against the night sky. We also discovered that we could peek down at what people were doing in the city. We saw a rollerblading ring, older people line dancing in a park, and people walking along the streets into restaurants and bars. It seems like everyone goes outside at night to walk and have fun after dinner.
Instead of taking a taxi back to the hotel we were feeling adventurous and decided to take a scooter taxi back to the hotel. The scooter taxi is just what it sounds like. It is a scooter that hauls a covered cart behind it. The breeze felt fantastic and the ride itself was very thrilling. Buses and cars came within inches of the scooter and pedestrians stepped out in front of us several times. We went through a roundabout and I have no idea how we were not hit. Our driver weaved in and out of traffic and when we were only a block away from our hotel, he started driving down the wrong side of the road so that he could drop us directly in front of our hotel. Yikes!

Full of eats and treats. 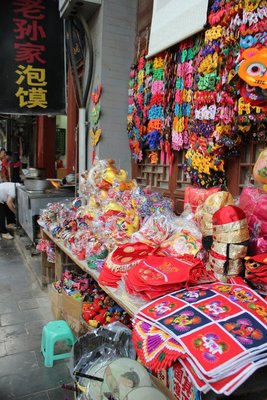 Large populations of Chinese Muslims live in Xi’an. The Muslim Quarter is south of the drum tower and is a very vibrant, lively and interesting part of the city. The Muslim men wear white caps on their head and the women wear brightly covered scarves over their head. The Muslim Quarter is the only part of the city with very old buildings and houses in their original form. It looks and feels very different from the rest of the city. We ambled down one of the main streets, looking into shops and watching people. There are so many children in Xi’an! Everywhere we went, children were playing on the sidewalks with siblings (maybe not with the 1 child policy in China) or friends. 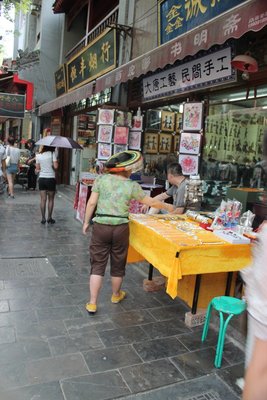 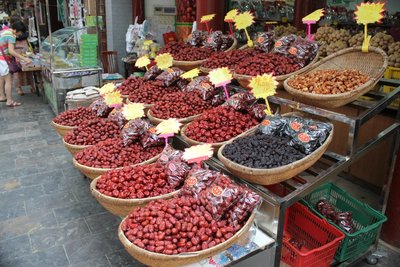 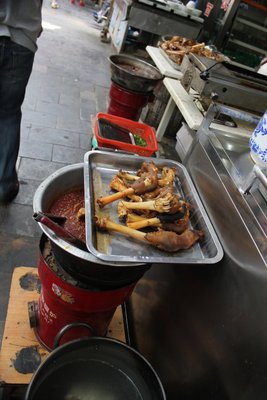 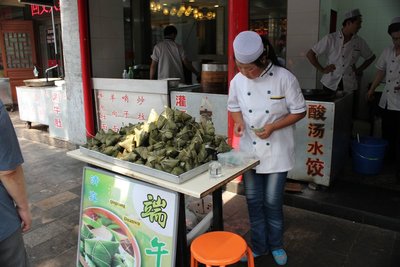 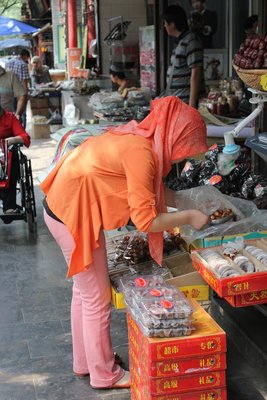 We saw men playing Chinese chess, birds in cages hanging from trees, caged crickets in shops, and many unique food items like goat hooves and exotic fruit. We were advised to look but not eat as sanitation standards are not quite what they are in the US. Sigh…some of the food looked really good.

Girls were preparing pitas filled with dates and meat and there was a fried doughnut looking thing that was calling my name. I settled on a Sprite and just sniffed the delicious looking treats. 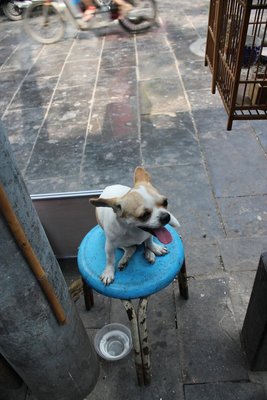 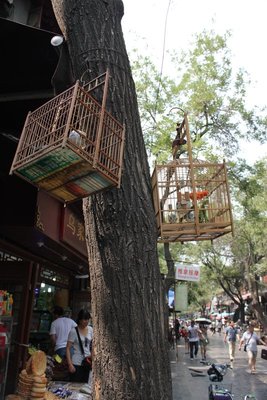 This cute little guy was guarding the birds. 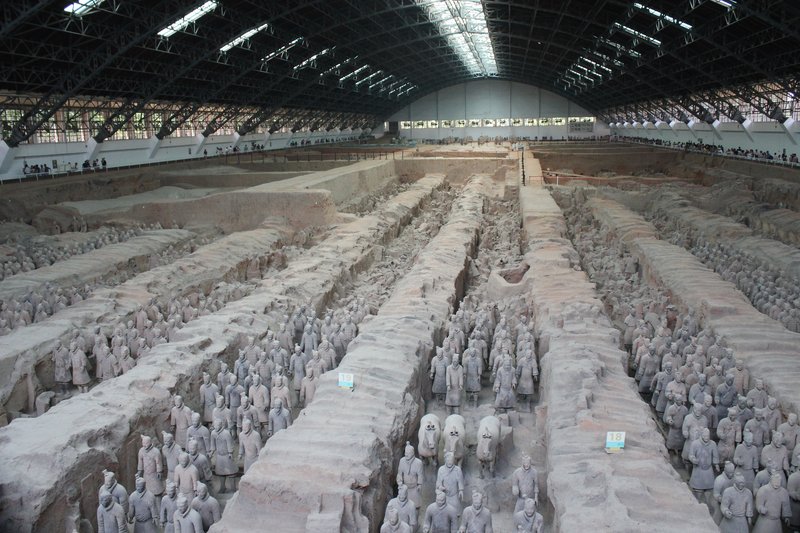 We met our guide in the hotel lobby at a later start time than usual for us – 8:30. The drive to the museum took about 45 minutes. We stopped at a craftsman shop before we went to the museum so that we could see the technique for making the warriors. The modern technique is very similar to the one used by the workers 2,000 years ago. The main difference is the use of coal to fire the kiln instead of wood. The man at the kiln told us that if they still used wood like the original makers of the terracotta army to make the replicas he sells in his shop, “There wouldn’t be any trees left on the mountains”. The fire under the kiln has to burn for 7 straight days in order to fully bake the clay. The guy that was telling us all about the local handicrafts was hilarious. He loved to talk and talk. He helped me learn a few Mandarin phrases and gave me tips on how to properly pronounce words. Apparently he knows several languages and loves a chance to show off his skills. He also was chatting up Julia, our guide. She tried her best to avoid him but there was no avoiding that guy! He was fun and seemed to love life.
Before the items are fired, they have to be molded and details must be added. There were several ladies at the shop that had trays of little horses and soldiers that they had finished. Everything is still done by hand. Dan doesn’t typically like to buy things, but he found a general and a soldier (both about 8 inches high) that he liked and so our luggage will be just a bit heavier.
The complex that houses the actual pits with the Terracotta Army looks a bit like driving up to an amusement park. The parking lot area is crowded with buses, walking tourists, and people hawking goods. Around the outside of the lot crowds countless stalls filled with colorful cloth and plastic souvenirs. It was a little shocking to see the “8th Wonder of the World” staged like this. From the lot to the pits took a 25-minute walk on a smooth, wide stone path that was lined on both sides with more shops and little restaurants. The temperature was a balmy 90 degrees and the 25-minute walk felt much longer because of the heat. I need to buy on e of the parasols that so many Asian girls carry. They look a little silly, but they are a practical way to block out the sun and keep cooler.
When we finally reached the area with the pits, we were ushered into a 360-degree theater to watch a movie about The Qin Dynasty and how the army came to be. To watch the movie, our heads were constantly swiveling to see the action all around us. It was a strange movie with long pauses and dramatic music. By long pauses in narration, I mean a 2 to 3 minute lapse. We kept thinking the movie was over but no one was leaving the circular theater.
After the movie, we walked to see the bronze chariots, one of which is a replica and the other an original that was restored. They were built at ½ scale because the bronze technology was limited at that time and they were not able to make them full scale like the other warriors. While these items were interesting, it was hard to get much of a glimpse due to the mad crush of people. I managed to jostle my way to the front of the exhibit and snap off a few pictures before I got bumped out of the way. In China, people are really pushy. Not in a mean way but in a” get out of my way I want to see this, too” way. I’ve learned to not take offense; it is simply the way things are done here. People will skip to the front of a line if they can and no one says anything. I guess when you are surrounded by so many millions of others, you have to be a bit pushy at times. 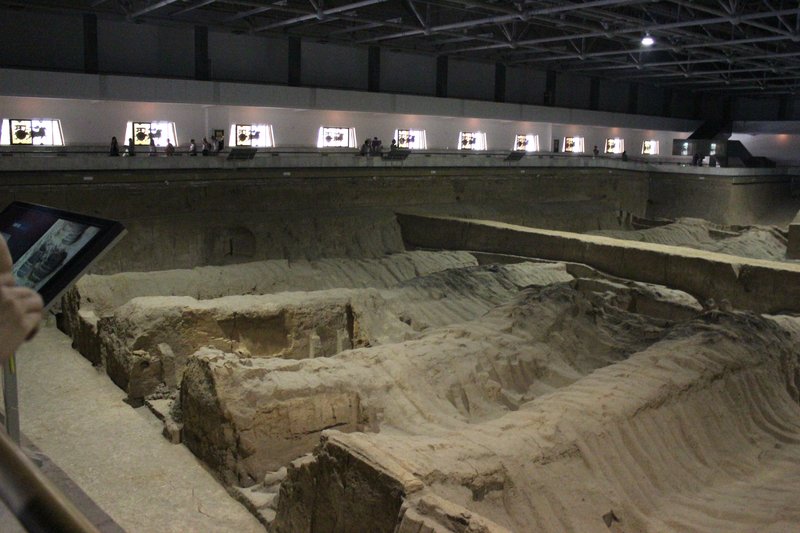 After the chariots we finally got the opportunity to peek in one of the pits. We started with the smaller pits and left pit 1 for last. Pit 2 is a more recent excavation sight and the majority of the soldiers are still under roof. Let me explain. When 4 farmers digging a well discovered the pits, archeologists started doing exploration digs. They uncovered structures that housed the warriors. The structures are clay roofs on top of wooden beams with sealed entrances and exits. The wooden beams rotted away and the clay roofs collapsed on top of the terracotta warriors so the pits look like undulating grooves with some parts open where you can peek at some of the warriors. Only Pit 1 has a large number of warriors on display. In Pit 2 we could only see bits and pieces of soldiers scattered around the entrance to the soldiers. There are also scorch marks on the tops of some of the clay roofs. A rebellion against the Qins sprung up shortly after Qin’s death and the rebels armed themselves with the bronze weapons fashioned for the terracotta warriors. On their way out from pillaging the clay army, they set fire to the wooden timbers. So a lot of the warriors are in bad shape due to fallen roofs, rebels destroying things, and time.
At this point I was wondering how the tomb, and it really is a part of the tomb of Emperor Qin, managed to remain a secret until 1974. The answer is that many floods covered the area over the years and the location was not written down as it was to be a secret. The son of Emperor Qin had the builders sealed inside his father’s tomb when he buried him. Cruel kid. Of course the rebels plundered the soldiers for weaponry but that was before the area was flooded. The soldiers are covered by 15 to 21 feet of silt deposited by floods.
Pit 3 held the army headquarters with only 72 warriors and horses. Most of the warriors were of a higher rank. 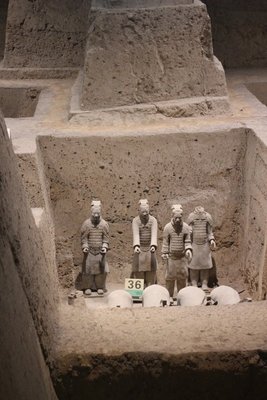 Pit 2 is mostly covered but has about 1300 warriors under those rooftops. Five restored soldiers are on display in glass cases. Each of the warriors has different and unique facial features and expressions. By each, I mean every single soldier, all 8,000 or so.
Impressive is an inadequate word to describe Pit 1. It is under a structure the size of an airplane hangar and holds 2,000 restored warriors with an additional 4,000 soldiers underground or in the “Soldier Hospital”. We visited on a Sunday so we didn’t have a chance to see the restoration process of the broken soldiers. All of the soldiers need some work before they can go back into their original spot in the pit. 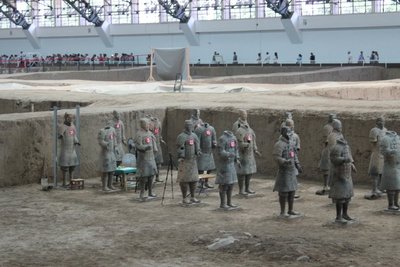 On our way back to the lot Dan said that he felt that everything else we would see would pale in comparison. I think he really liked it.